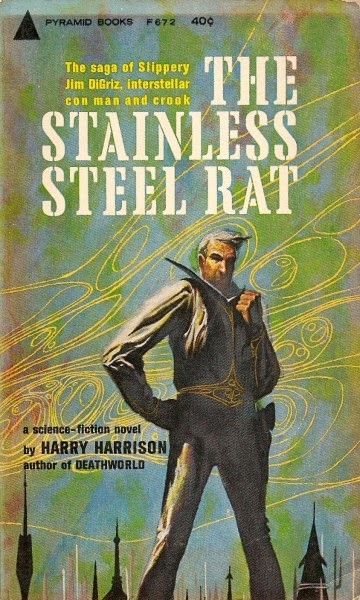 "We must be as stealthy as rats in the wainscoting of their society. It was easier in the old days, of course, and society had more rats when the rules were looser, just as old wooden buildings have more rats than concrete buildings. But there are rats in the building now as well. Now that society is all ferrocrete and stainless steel there are fewer gaps in the joints. It takes a very smart rat indeed to find these openings. Only a stainless steel rat can be at home in this environment."
(Harry Harrison, 'The Stainless Steel Rat', 1957)


This morning I had seriously wanted to write some kind of acerbic response to Lee Coan's article in the Telegraph Online (normally for newspaper's web presences, putting 'online' after their title is passé and pointless, but for the Telegraph all this modern shit is still pretty novel, confusing and frightening).  But then I decided that a far more positive response -  that would simultaneously refute and devalue everything that article, and its writer, stands for - would be to post some stuff about my friend Ian Rees - skateboarder, adventurer, mystic and weirdo.  Dave Bukowski Bevan has already written a great qualitative piece on this dude in Sidewalk a couple of months' back - but, to my knowledge, he's never had a full interview/'haunts'/'shine on' thing in Sidewalk or Kingpin, despite racking up photos in both over the decades.
Its timely to shine a light on Ol' Dutty Donno, not just because he's still shredding hard on all terrains, but because his successful existence sticks a finger up at (and just up) everything that snide article in the Telegraph said about skateboarding 'after a certain age'.   Interestingly, I think if the columnist responsible were to meet Rees - he'd probably come away snorting that he seemed like a "pretty interesting chap."  This is testament to someone who hasn't compromised in living the normal life (avoiding mortgage plus job that you hate), and has maintained conviction in doing this on his own terms - travelling, skating to a ridiculous standard, reading widely, and manufacturing some of the most surreal, perverted actually-did-happen stories known to man.  Myself on the other hand - house, job I hate etc. - if I were to meet Lee Coan, he'd walk away thinking I was some hateful loser, who'd failed at life, even though, in career terms, I've done OK.  But I wouldn't go into this hypothetical meeting with 100% conviction that my path had been a good one - I'd be full on compromise and uncertainty.  And the occasional 1990s rap reference.  Rees has the capacity to charm even the most close-minded of people - to the extent that they'd fail to bat a hypothetical eyelid as he inevitably shared a graphic story about getting one's genitals stuck somewhere terrible.
First scan is from a copy of an August 1995 Sidewalk curated by Scotty at 42, Rees' 'First Offence' (pre First Light rename....  didn't RAD magazine used to call their equivalent 'Fresh Meat'?).  This flat bar is behind Showcase cinema in Nottingham, which Jon Weatherall had a contents page crooking - a 50-50 on this is rock hard though, as its so close to the corrugated wall. Try it... think its still there.  Me and a buddy went with the express objective of crooking it a few years ago as a mid-winter Weatherall homage mission.  I succeeded, he failed...  it rarely works that way round. 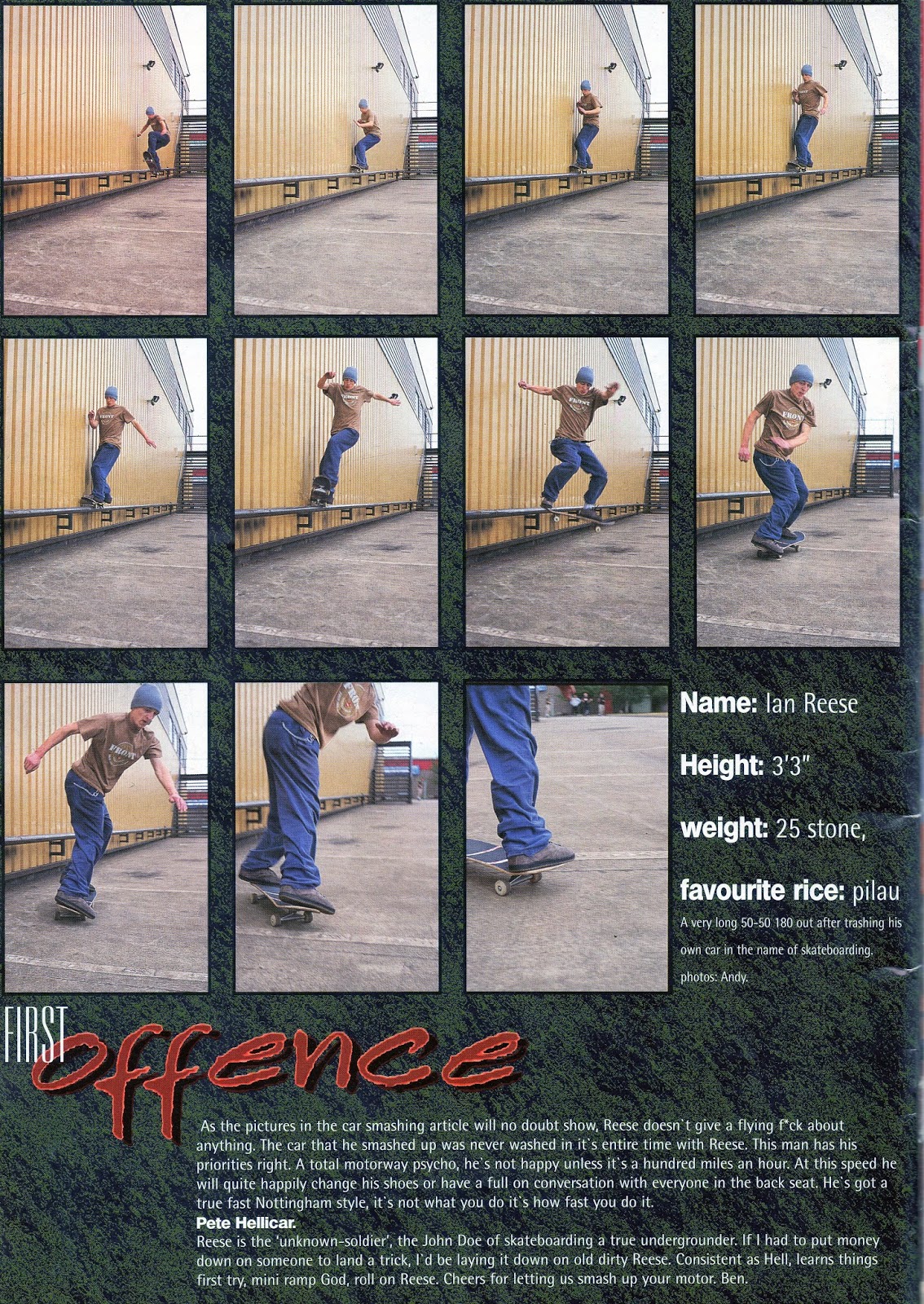 This is from the August 1997 Sidewalk, back when they did a regular feature called 'twisted' with dudes succeeding at weird, tricky, scary stuff - which Rees excels at.﻿ 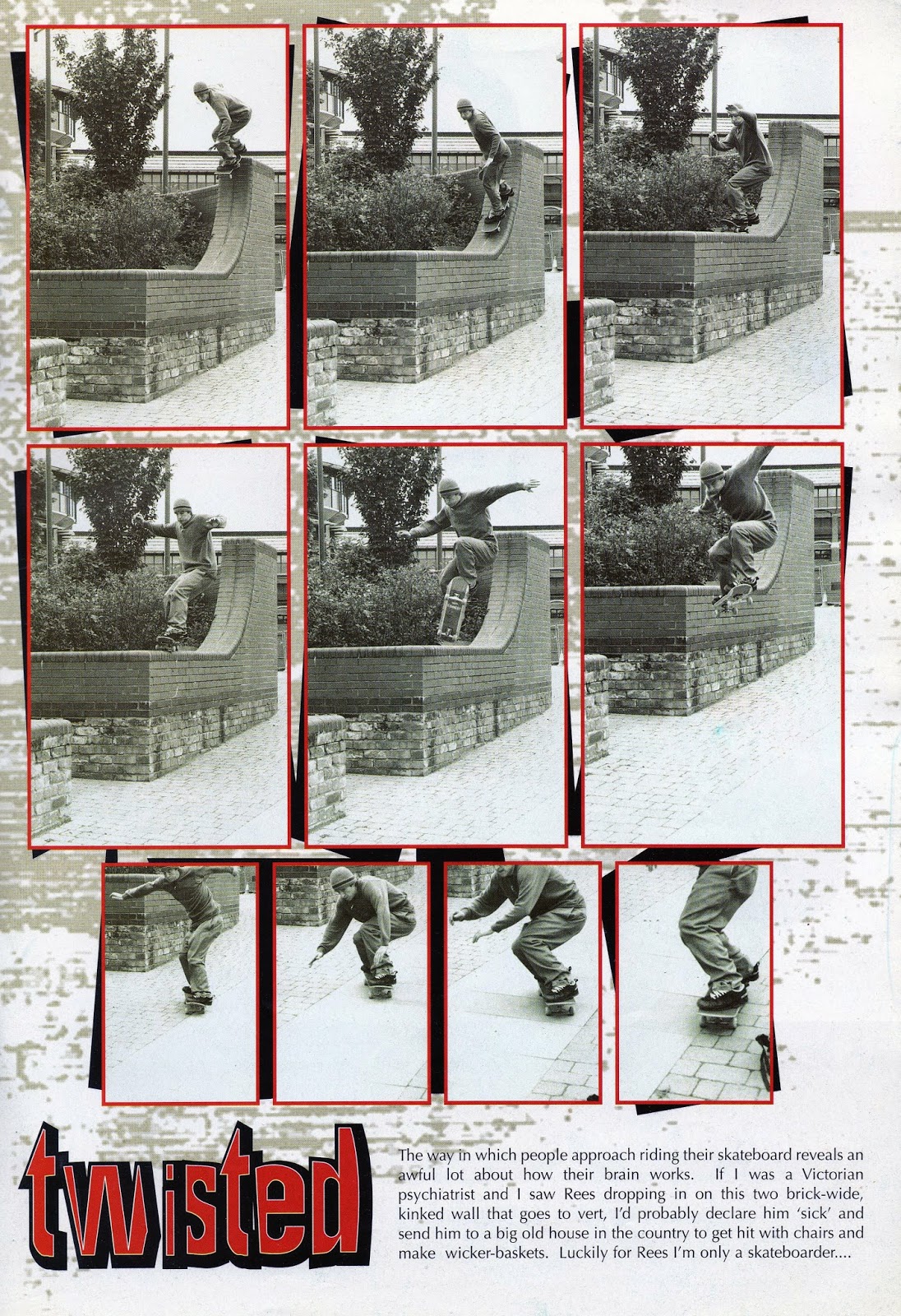 Final two photos for this post are two Icon ads - the now defunct Rollersnakes-owned brand of the late-90s-to-mid-2000s, pre-taking on the Unabomber brand.  Icon never quite found their image, but they had a diverse team of mainly midlands-based rippers - including, at various times, Scotty, Smedley, Rees, Culshaw, Derby's own (Franken-)Fletcher, Mark Vasey, Dan Leech, Brad Garner, and a few others.  The first, from May 2005 is at the old Sainsbury's hip in Beeston.  Stacey Lowery tres-flipped this on some tour or other, Joel Curtis back 5.0'd it, and Mark Baines did a tricky front-side noseslide to revert thing.  Rees' front crook is proper amazing - and at the time when the building behind was due to be demolished (sadly along with the banks, hip and bar) - so the run-up and out was even worse than it looks.  Me and my buddies lived around the corner and used to skate here almost every night - and hardly ever touched the pipe/bar.  Second photo is from Livi - in 2006, in a Nottingham bros trip to Scotland, that remains one of the best skate trips of my life - Rees on a mini bus driving, non-stop shredding, weird story telling, transcendental time-keeping tip the whole way 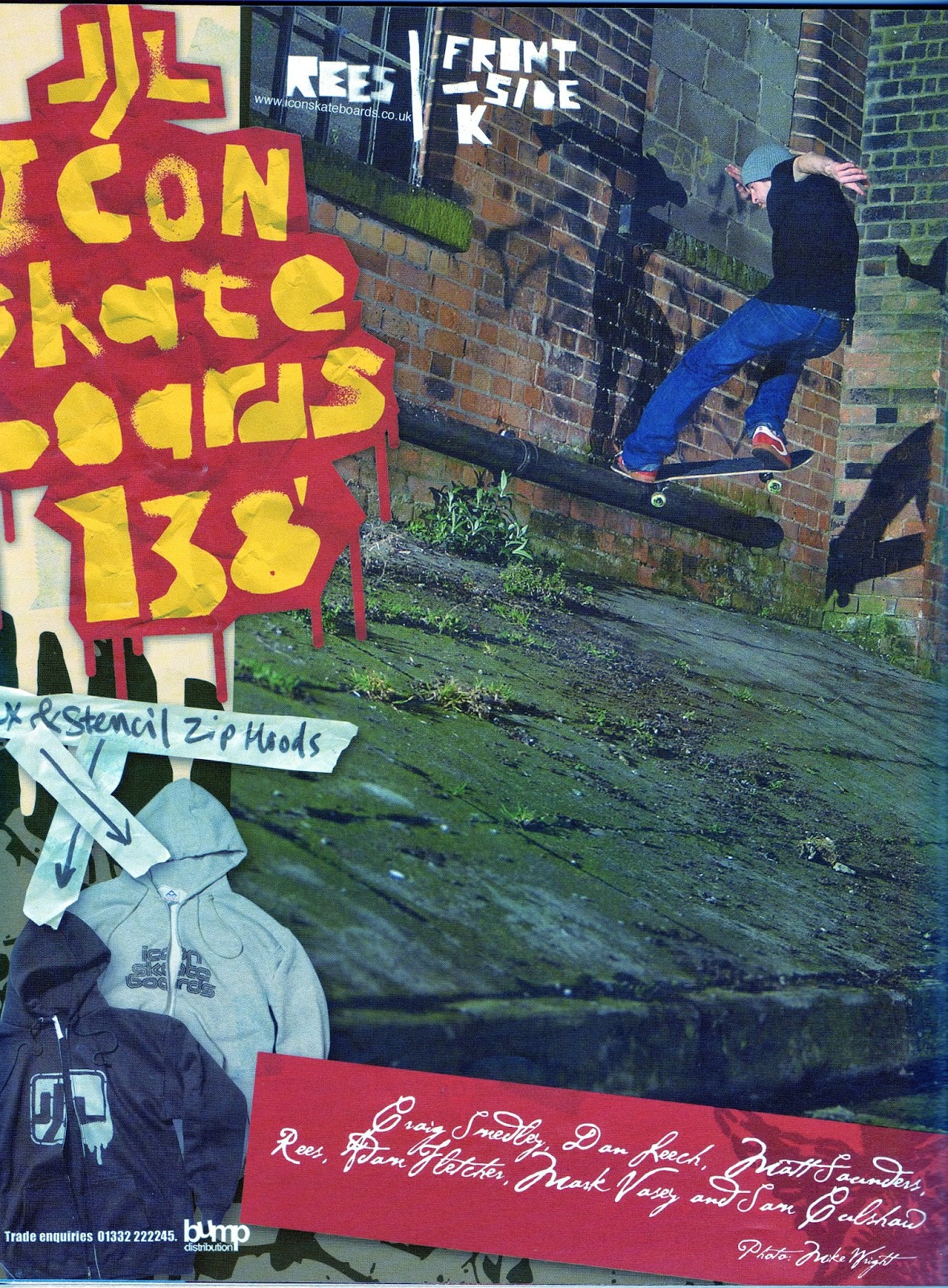 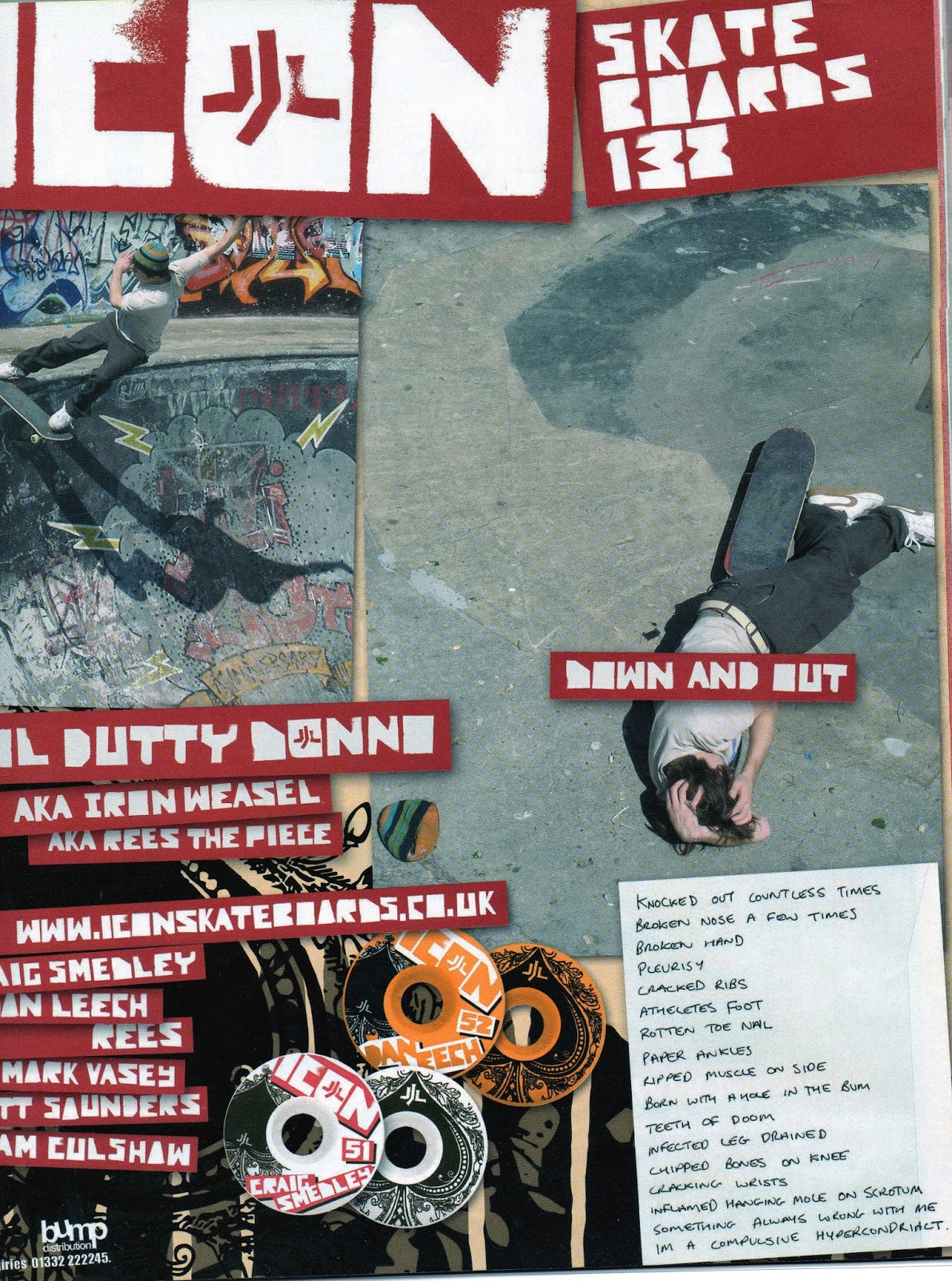 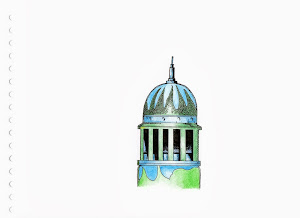